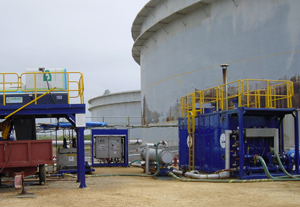 Just a few weeks into 2015, the company has confirmed it has acquired part of the business and assets of Tradebe Refinery Services (TRS) based at Sandycroft, North Wales, and formerly known as Willacy Oil Services.

Willacy, founded in 1989, is a specialist in petrochemical tank cleaning and oily sludge treatment and recovery systems.

International environmental services group Tradebe bought a major shareholding in the business in 2003 and completed a takeover in 2006. It changed its name to Tradebe Refinery Services in 2012, but ceased trading at its Sandycroft site in December last year.

CSG says it has now acquired the one-acre site and is currently looking at re-establishing the business.

“Willacy have worked on refineries in the UK and around the world and the name is well recognised in the oil industry,” he said.

Fareham-based CSG see this latest acquisition as a further step in a dynamic expansion programme, especially in the valuable waste oil recovery market in which it is already a major player.

Mr Richards said the company aspired to significant growth in its market share in this sector.

CSG has invested heavily in new technology designed to treat polluting oily water wastes which can be converted into fuel oil for industrial use, and says it already has the capacity to recover some five million litres of oil each year.

CSG’s enthusiasm for growth has seen it expand steadily over the years and it now owns brand names such as J & G Environmental, Lanstar, Lloyds Environmental, Sealand and Saxon Recycling.